A large upper level storm system will move in from the west in different pieces over the next few days affecting much of the southern plains bringing ice and snow to a large area. OUN has issued a freezing rain advisory for tonight with the first round of precip expected. 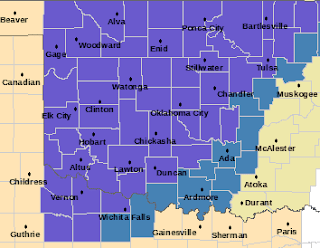 There will likely be a break in the activity on Sunday during the the day and into the evening but another round of possibly heavier precip is expected on Monday. Here is a graphic from NWS Lubbock depicting the situation. 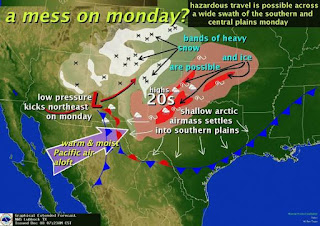 The Hydrometeorological Prediction Center paints a picture with high QPF amounts and a good chance of accumulating ice for Monday.

The reason for ice rather than snow for much of the region is the depth of the shallow air. A warm layer above the surface (~850mb) will persist as the shallow subfreezing artic air works its way in underneath this warm layer. Here's the sounding from Norman, OK this morning showing the large temperature inversion and the cold layer just near the surface.