We got on a few severe warned storms in se SD yesterday. The first was an isolated cell near Lake Franics Case just to the north of Platte. Seen here is a shot of the high based storm growing. 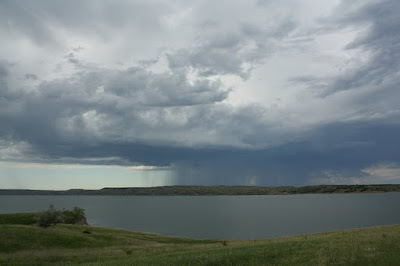 We continued to stay on it for a while and it had a small lowering that was reported as a 'wall cloud'. Not sure about how accurate that was though. Here is a shot. 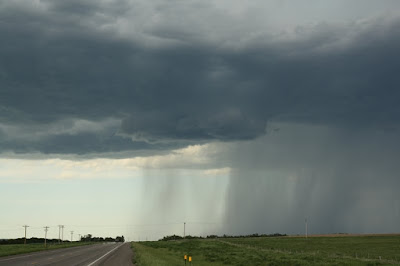 We decided to bail on that storm as it became a bit more outflowish and decided to target the tail end of a severe line north of I-90 near Huron. Driving up on the storm near Mitchell the updraft was fairly impressive and the storm became tornado warned displaying some decent rotation and and intereting lowering back in the rain. We were trying to get into better postion so no pics were taken but I might get a video still up later. The storm quickly became outflow dominant and we decided to just call it a day and headed towards Sioux City, IA to get some sleep.

This morning we are targeting the nearly stationary frontal boundary in southern NE. Currently on the road driving towards Lincoln, NE or somewhere near there. More later...
Posted by Sam Dienst at 9:34 AM